Elinor DeWire is an award-winning researcher, photographer, and writer about lighthouses

Elinor has been researching, photographing, and writing about lighthouses since 1972. She has visited more than eight hundred sentinels in the United States, Canada, the Caribbean, Europe, New Zealand, and Australia. She is the author of over twenty books and more than 250 articles on the subject of Lighthouses.

Former Coast Guard historian, Dr. Robert Scheina, calls Elinor, "America's most prolific lighthouse author and a driving force behind the recent upsurge in interest in preserving lighthouses and the history and nostalgia surrounding them."

Elinor has been honored for her work by
- The U.S. Lighthouse Society,
- The American Lighthouse Foundation,
- The U.S. Coast Guard, and
- The National League of American Pen Women.

Two of her books have won the coveted Ben Franklin Award and the Coast Guard Book Award. 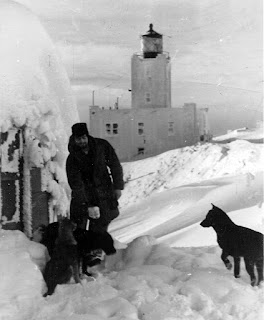 She lived in the Puget Sound area of Washington for many years and taught at Olympic College. Today, she lives in Connecticut and is retired from teaching. She continues writing from an office that overlooks an oak and beech forest.

Her desk is strewn with books and papers, where two lazy cats like to sprawl.

To learn more about Elinor and her work, visit her website at www.ElinorDeWire.com. And you can subscribe to her blog at   www.elinordewire.blogspot.com

You can learn more about Elinor's work by visiting and following the her on the following social sites:

The SuccessInSight Podcast is a production of Fox Coaching, Inc. and First Story Strategies.
Posted by Rose at 7:52 AM